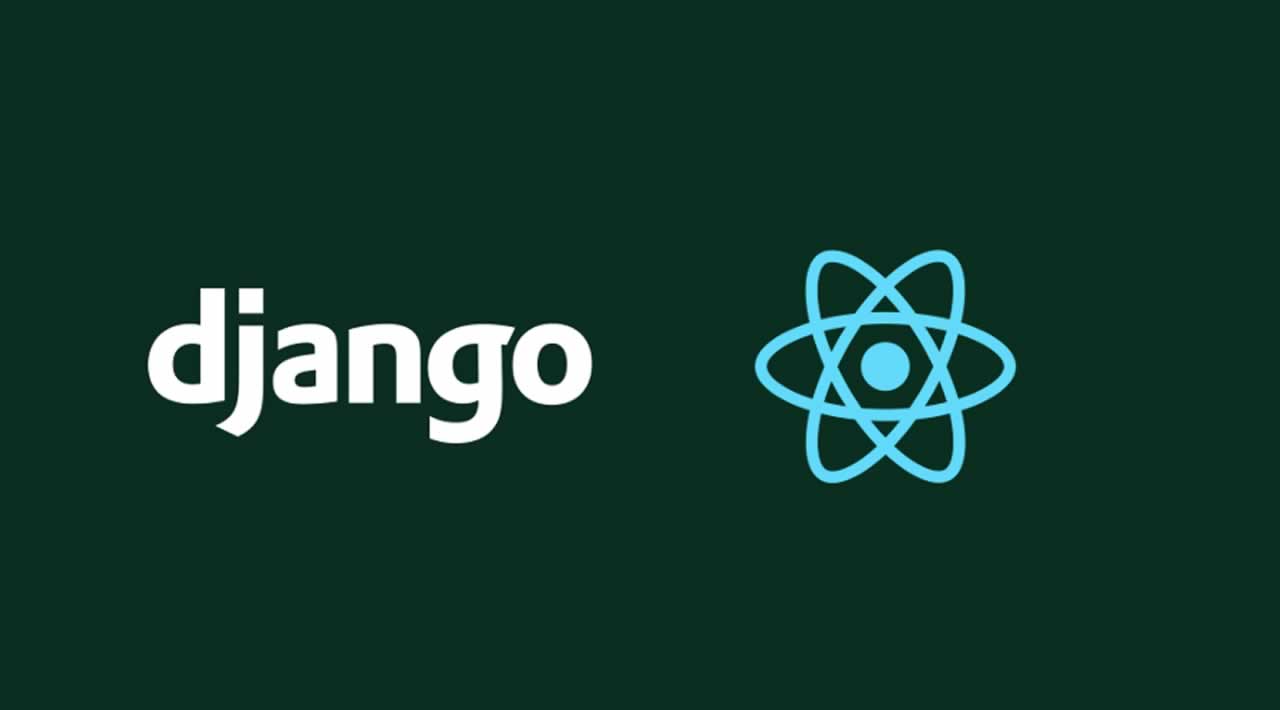 React is a JavaScript library created by Facebook. It is a tool for building a UI (User Interface) component. It is widely used for making SPA(Single Page Application) and it has a large developer community.

Django is a Python-based web framework that encourages rapid development and clean, pragmatic design. Due to its ready-made and stack full of wonderful features, from authentication to session management, all these make it ridiculously fast.

Reason to choose React with Django:

Advantages of connecting React with Django:

As both the parts will be handled separately i.e. React and Django. Here is the list of advantages of using them separately.

Connect front-end with back-end: This usually happens because we start learning either the front-end part (HTML, CSS, Bootstrap, or React, Angular, or Vue if using the framework) or the back-end part (Node.js,  Django, etc. or any other framework). Anyways that’s the way of learning.

Let’s understand the basic workflow of the connection. These 2 key points are building blocks of Web Technologies.

About the Project: This project is a simple application in which you can write a quote and the name of the author. Basically based on CRUD(Create Read Update and Delete) operation.

Setting Up the back-end: Create a project folder for Django by creating a virtual environment. You must have installed virtualenv package.

Step 1: If not installed install it by typing a command on the terminal.

Step 3: Install the below packages by using pip 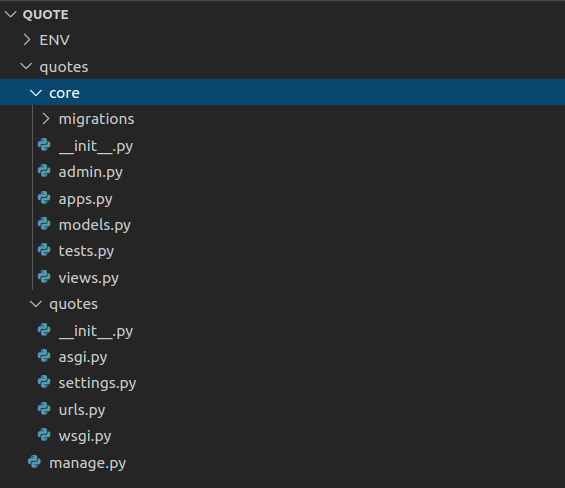 We can test to see that CRUD operations work on the React model we created using the admin interface that Django provides out of the box, but first, we will do a little configuration.

Open the core/admin.py file and update it accordingly:

You will be prompted to enter a username, email, and password for the superuser. Be sure to enter details that you can remember because you will need them to log in to the admin dashboard shortly.

Let’s start the server once more and log in on the address — http://localhost:8000/admin: 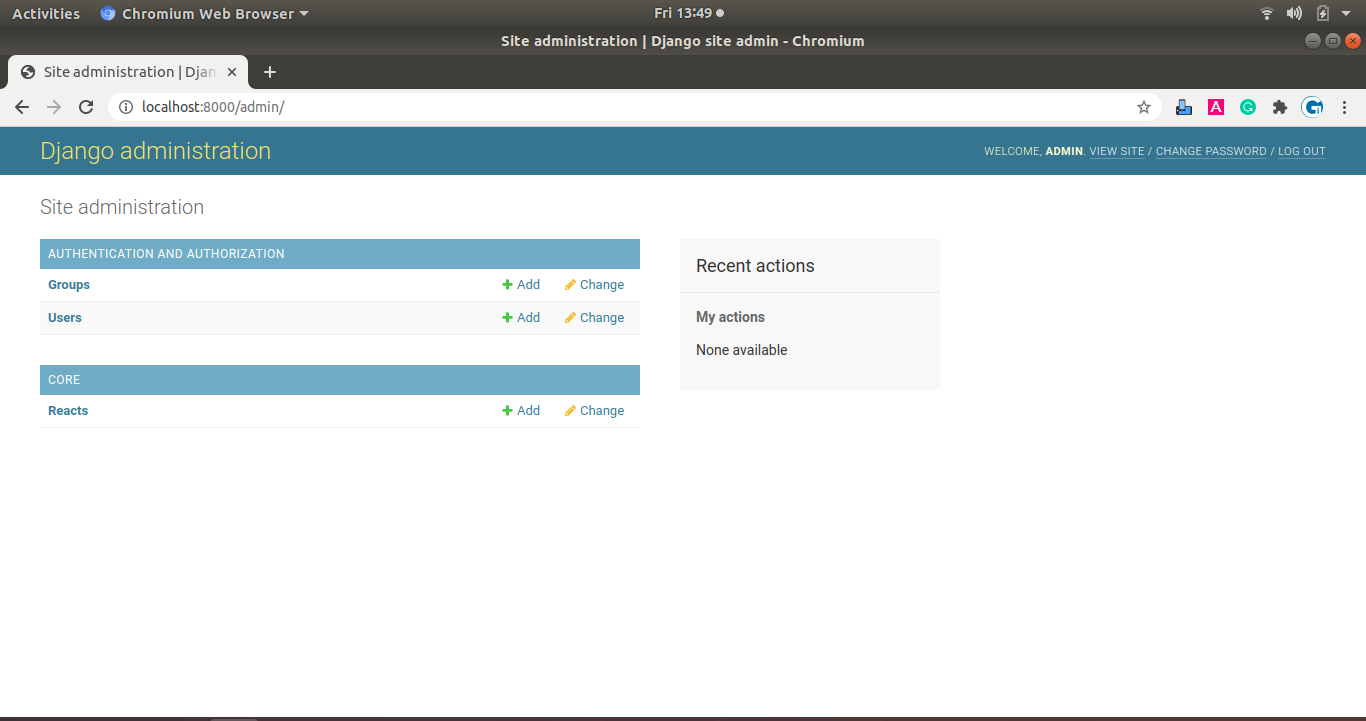 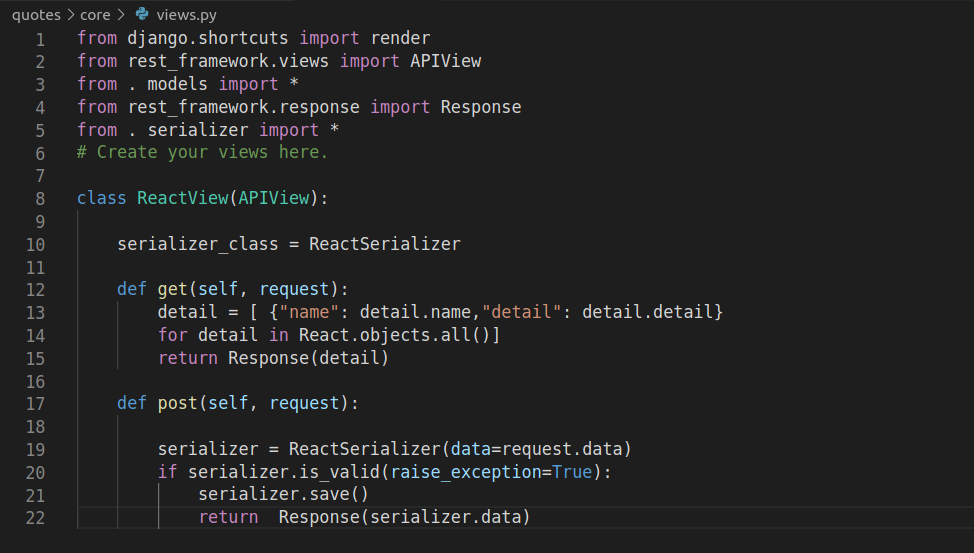 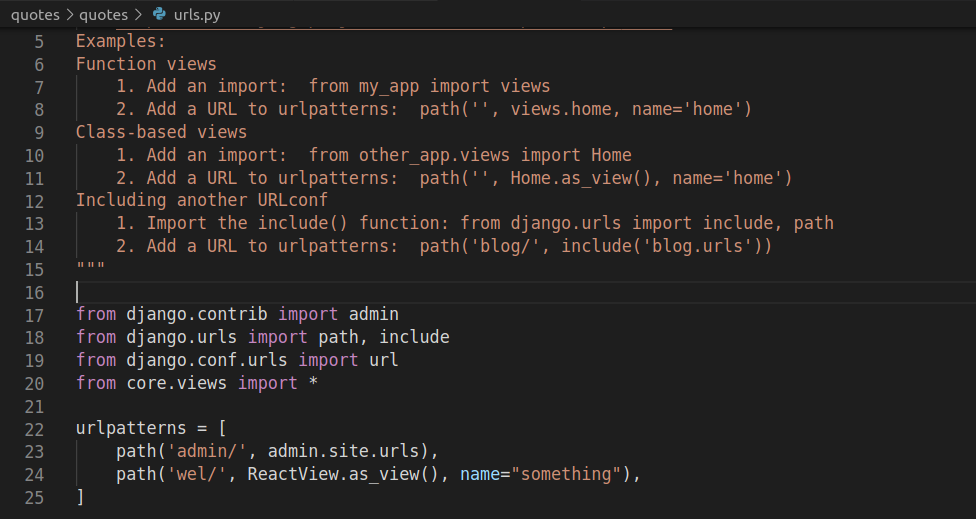 Step 7: There are few changes in settings.py file which are listed below

You might be thinking about the corsheaders package. Actually, the cors headers package is used to tell the browser that web application running at one origin, access to selected resources from a different origin.

Now let’s get back to the final part of our back-end. Run the following commands on the terminal.

Open the web browser of your choice (Chrome recommended) and search for localhost:8000/wel/

Setting Up the front-end: There is no boundation to make the front-end folder in the same directory where the back-end folder lives. Also, there is no need of making a virtual environment for React. Use the following commands to get ready for React Application. Using Bootstrap for styling and better look and feel, jQuery is for the dependencies with bootstrap.

Go back to the base directory folder 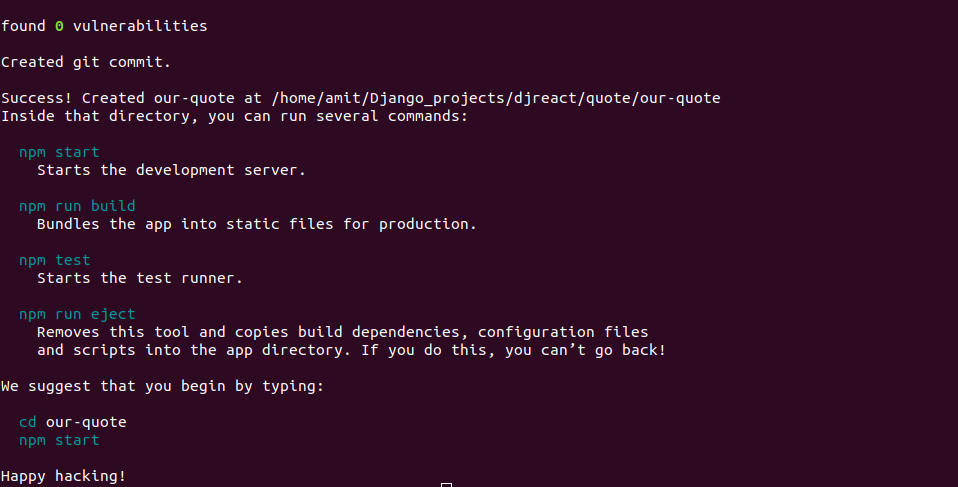 Axios is the main tool for connecting back-end with front-end. All the requests will be sent to the server (back-end) with the help of Axios.

Output: After running npm start development server of React will start and by default can view at localhost:3000 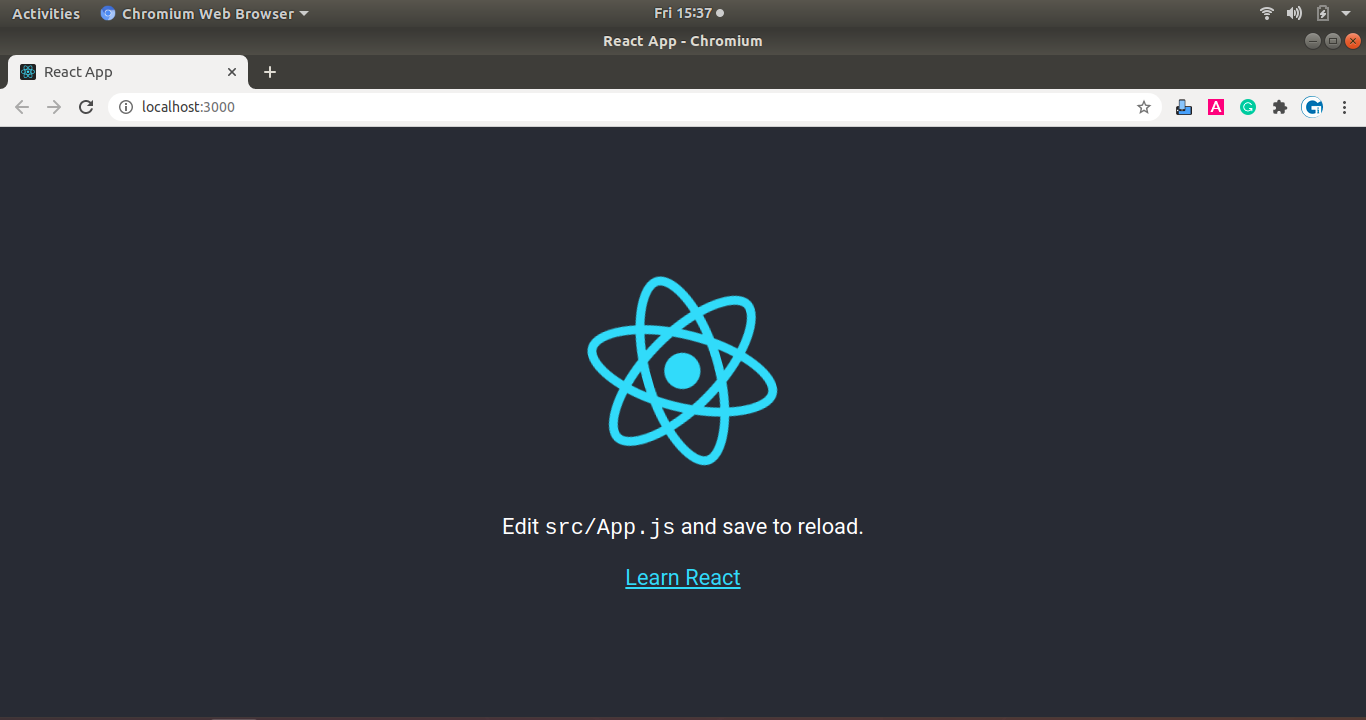 Output: After running npm start development server of React will start and by default can view at localhost:3000

App.js: Now we have to fetch data from the server by using Axios. The componentDidMount method is called when the component is rendered. This is the right time to request a server for the data. We have used Axios in this method to store the data in a state obtained from the server and later on rendered by the help of a map in JavaScript. 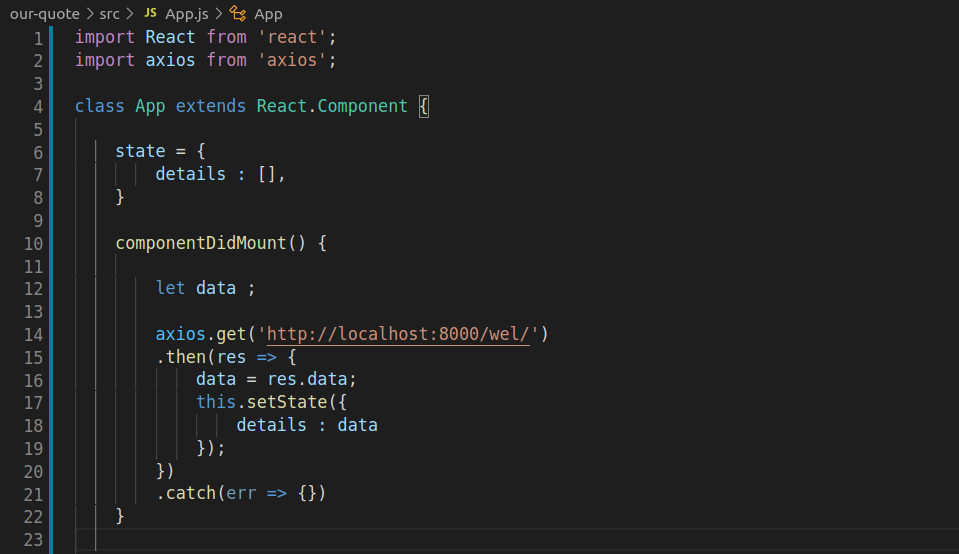 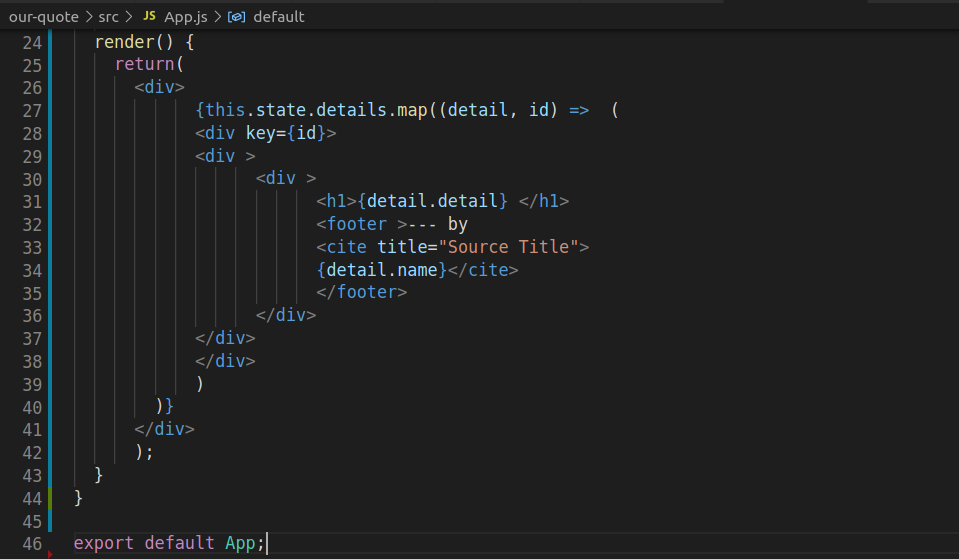 Output: As there is no data to display so fill some data in the database from the server-side. First add data. for that we have to run our django project.

after that enter to the project folder and run our django project.

Now open http://localhost:8000/wel/ in browser and add the data 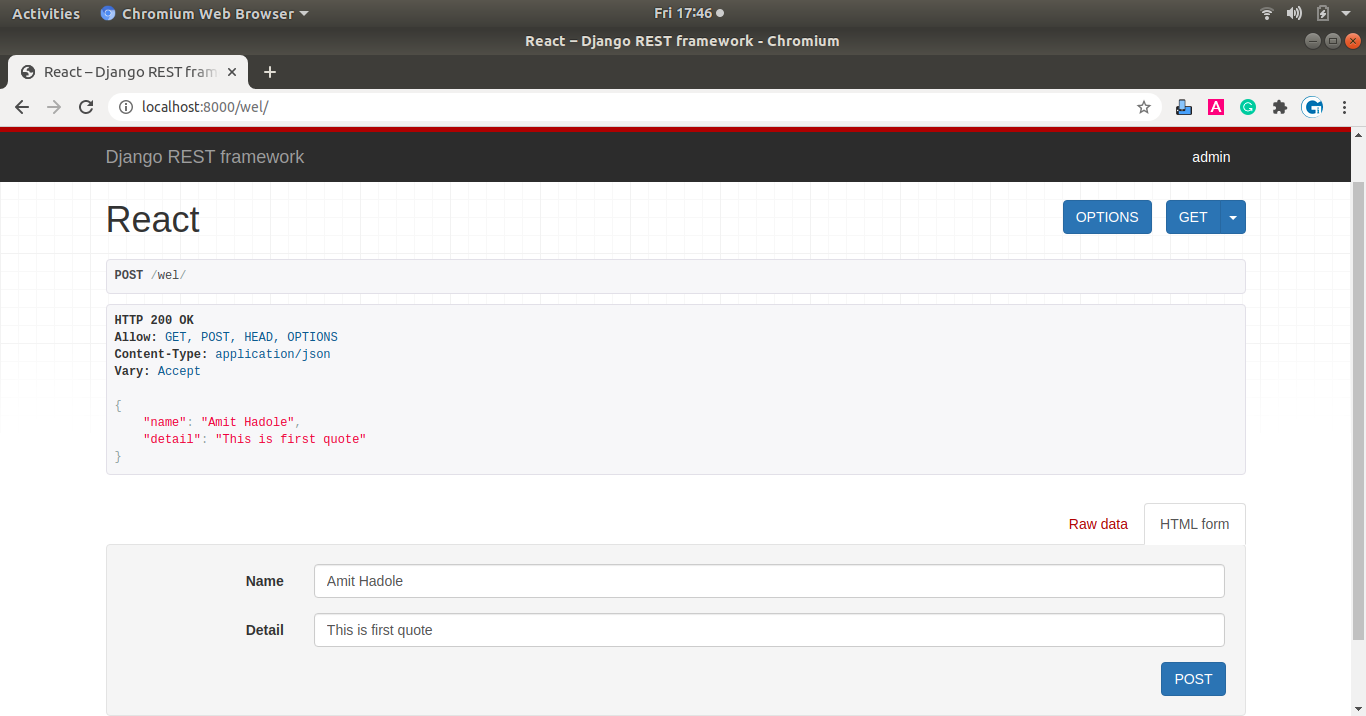 App.js: Now the only part left with this project is to create a form so that the user can fill the data from Client-side which is the correct way to do so. Here is the form submitting a response from Client-side along with bootstrap. 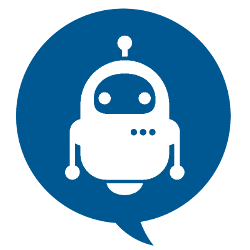